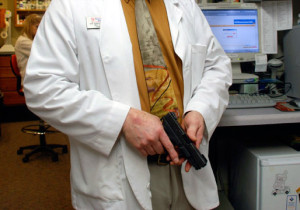 [Editor’s Note: Originally published on KevinMD.com on October 24, 2015 and republished here with the author’s permission.]

One word: gun. That is all it takes to spark a debate between two very different camps. One end of the spectrum feels guns are an evil haunting the nation by their mere existence, and they need to be dealt with by restricting (or even eliminating) everyone’s ability to possess them. The other end believes it is a core right to keep and use firearms for sport, personal defense, collecting, etc., and that no further “gun control” legislation should be enacted. As with all things in life, no one extreme is the right answer.

As we are in the wake of another school shooting by a deranged individual, the spectrum becomes further polarized. People are passionate about this topic, and this is an expected reaction. Those for gun control call for further legislation: universal background checks (which would require background checks for private gun sales), making straw purchases a felony and a federal crime (it’s already a felony, federal crime punishable up to 10 years in jail and $250,000 fine), and closing the gun-show loophole (the rules are no different inside or outside a gun show). Some even openly call for the repeal of our Second Amendment. I feel that most calling for further legislation and government oversight do so because they truly do wish the best for the nation.

We who are strongly pro-Second Amendment, despite popular opinion, do believe in safety and keeping firearms out of the hands of those who should not have them. We just believe there is a different, more effective, way to approach the issue without eviscerating the Second Amendment. I believe everyone has the right to defend themselves. One way I choose to defend myself and my family is with a firearm. If someone breaks into our place of dwelling and attempts to harm my family, I will not hesitate to pull the trigger. I would only fire in self-defense, as firearms should only be used to protect life. The toaster and other material goods can be replaced.

So, I’m a doctor with a firearm who is ready to use it. To some, this might sound counterproductive to my chosen profession. I got into the business to help save lives, not destroy them right? You got it. We in the medical profession feel called to help those in physical need. But me standing there, unarmed, with an armed madman in the room, means that there is a decent chance everyone inside could end up pushing up daisies. In fact, in a study in the Annals of Emergency Medicine, it was noted that there were 154 shootings in U.S. hospitals between 2000 and 2011 with 253 dead or injured. How many of these attacks could have been stopped or deterred in the first place if doctors and hospital staff to be allowed to concealed carry?

An English translation of the original Hippocratic Oath text contains the phrase, “With regard to healing the sick … I will take care that they suffer no hurt or damage.” I realize this does not mean to be the hospital policeman, but I feel it is my duty to help and protect those around me and under my care from physical harm.

Unfortunately, working in a hospital means I work in an “easy target zone,” otherwise known as a gun-free zone. The patient being treated for any condition won’t get a lot better with a bullet in them. Gun-free zones do absolutely nothing to deter those with ill-intent. I have yet to see a sign reach out and stop a crime or see a criminal stop and turn around from committing their heinous act by seeing this public notice. All gun-free zones do is advertise that, “Hey, everyone who follows the law inside is unarmed.”

Just take a look at this YouTube video which shows how futile these signs really are. Why shouldn’t doctors (and all legally allowed hospital staff) be allowed to concealed carry at work? I say this should be encouraged.  No one wants to use a firearm in self-defense, but in the rare and unfortunate instance it was needed, it could save lives. I’d rather have a fighting chance than be at the mercy of a gunman.

—Andrew Crisologo, DPM is a resident in podiatric surgery at The Ohio State University Wexner Medical Center. He seeks to be a resident voice to promote and educate others about the Second Amendment and its relation to the medical field.