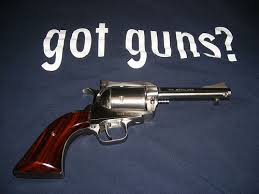 Each of us has opinions about whether others ought to have guns.  These sentiments are very much cultural and often irrational.   There are also sub-cultures who hold radically different sentiments even though they are parts of the same society.  To explore this, let’s study two nations and cultures, the United States and Mexico.

In America, uniformed police routinely carry guns openly.  In most of the country, it’s rare to see civilians openly carrying firearms within municipalities.   Consequently, the great majority of citizens think nothing of seeing armed police, but are apt to be surprised to see a civilian carrying openly in a city.

Now, let’s turn to an exceptional sub-culture.  Consider the adherents of the Black Lives Matter movement.  Members of this sub-culture have a heightened fear of the police, especially because they are armed.  There can be disagreement about how rational that fear should be. The fact is that they feel what they feel and these sentiments are based on their very personal life experiences.  This is also just the way it is for the vast majority of citizens who have not suffered from their encounters with armed police.

This author, as the preeminent authority on his own sentiments, is one of the vast majority of Americans who think nothing of seeing armed police.  Even so, I can empathize with the sentiments of BLM adherents.

Turning to Mexico, uniformed police likewise carry guns openly.  In Mexican municipalities it is unheard of to see a civilian openly carrying a gun (unless he is a uniformed private security guard.)  That far, U.S. and Mexican practices of open carry of firearms are similar.  A very important difference is the civilian population’s view of their police forces. The overwhelming majority of Mexican citizens have strongly reservations about the propensity for violence police forces.

The author is deeply immersed in both cultures and is familiar with the sentiments of these cultures.  I am also well-acquainted with the sentiments of civilian gun owners and carriers.   But I accept the fact that uniformed police will be armed whether anyone likes it or not.   And I have experienced stressful encounters with armed Mexican police officers.

I once had a traffic accident in a Mexican resort city.  My fault—I inadvertently drove straight through an intersection and went the wrong way down a one-way street. A little old lady crossing at the next intersection crashed her motor scooter into, and partly under, my vehicle.  The police were summoned and an armed officer arrived to take charge of the accident investigation.  The evidence weighed heavily against me.

I was acutely aware of the fact that the officer was armed (and, of course, I was not.)  However, I was reassured about his competence, integrity and reliability by his professional demeanor throughout the encounter.  He prepared the paperwork and explained in detail the formalities for disposing of my infraction.  My expectations were confirmed at the conclusion of the encounter.  We settled the matter according to culturally established local norms and parted ways.  No surprises whatsoever, and zero concern on my part about the fact that he was armed.

What are the differences in how people feel about encountering armed strangers, whether a cop in America, in Mexico, or elsewhere in the world versus civilians?

My own feelings are consistent.  I don’t care whether the stranger is armed or not, whether he is police officer or civilian.  Armed or not, his demeanor is the only thing that influences me.

Others’ sentiments which will be based on their own life experiences. But no one can really know the exact jeopardy posed by an encounter with a stranger.  That the stranger is wearing a uniform proves little.  An American BLM adherent will experience apprehension from a uniformed armed cop that a native of a Latin American country would experience in the same situation in his neighborhood.  The reasons for their feelings are similar even though the broader cultures and motivations of the individuals are very different.

Not being uniformed is similarly not determinative. I encountered two openly-armed women not in uniform in “gun-free” New Jersey, one in a court house and another in a coffee shop.   The armed woman in the court house assured me that she was not a police officer. The coffee shop patron claimed to be a detective.  Regardless of supposed “gun free” laws, one should never assume that civilian strangers are unarmed. They could be carrying concealed firearms legally or not.

I nearly always carry, concealed.  No one I encounter shows the slightest fear of my presence.  I It doesn’t cross their minds to wonder whether I’m armed.

How concerned should we be about how our fellow citizens feel about people they encounter being armed?  We should be more concerned about our fellow citizens going unarmed to parking garages.   Mrs. Dustin Friedland, whose husband was gunned-down before her eyes in a Short Hills, New Jersey parking ramp by Hanif Thompson in December, 2013, must have strong feelings.

We should be concerned about how Amanda Collins feels, who was raped by James Biela in sight of the closed-for-the-night campus police department on October 22, 2007.  Although she had a Nevada carry permit the University of Nevada-Reno forbade on-campus carry. UNV only begrudgingly granted her special permission to carry after she was raped because she “felt terrified to go on campus.”

We know how Ms. Collins feels about being deprived of the means of effective self-defense.  We won’t ever know how Briana Denison might feel that Amanda didn’t have a gun on October 22.  Because Amanda couldn’t stop Biela, he went on to kidnap, rape and murder Briana near campus in January 2008.

How do each of us feel about the possibility that strangers in our midst might be armed?  That’s all about culture.  It’s far more important how we feel about not being armed in the midst of strangers who are.