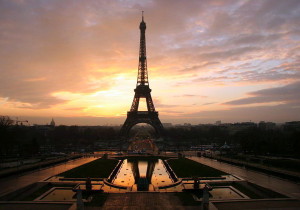 Europe is under attack again.  Islamic State (ISIS) militants have claimed responsibility for Friday’s coordinated deadly attack in the heart of Paris, with the toll from automatic weapons fire and explosives currently at 132 dead and 349 wounded.  The attacks were stopped by French security forces and notably, by no one else.

Security experts had warned of such attacks on the continent since the similar Madrid train bombings in 2004, which claimed 191 lives.  The world has endured such terrorist attacks for years now.

Michael Bloomberg’s puppet gun prohibition group Moms Demand Action immediately and disgracefully exploited the disaster by posting to Facebook this image with the caption “We are united in mourning all lives lost to gun violence” (backup copy here).  Bloomberg’s millions have evidently bought for the Moms, among other things, a hair-trigger (pardon the expression) vigilance for maximizing the PR dividends of blood spilled on a massive scale.

Using national-scale tragedies as an opportunity to broadcast talking points or manufactured buzzwords like “gun violence” is a hallmark of gun prohibition groups. Bloomberg’s Moms simply seem to be following the Gun Control Playbook (backup copy here), which after all, advises gun control activists to “always focus on emotional and value-driven arguments”.

So it’s perfectly understandable that, before the bodies are counted, gun prohibitionists leap to compare American gun owners to ISIS murderers. It’s what they do.

By contrast, DRGO extends to the people of France our heartfelt condolences at this terrible time.  We all remember 9/11 as if it were yesterday, and we know the profound assault on peace of mind such an attack has.

We cannot ignore the lesson here—unarmed citizens are vulnerable citizens.  Three mobile teams of heavily armed terrorists carried out the attacks on a concert hall, a major stadium, restaurants and bars.  Crowds of Parisians out on the town were defenseless in the face of shootings and bombings.  France’s draconian gun control laws assured that essentially no one but the terrorists were armed.

Could the death toll have been reduced if France didn’t prohibit the right of armed self-defense to its people?  If the American experience tells us anything, it is that mass shooters are most vulnerable to the unexpected and immediate intervention of a plainclothes armed citizen who happens to be on the scene. American experience tells us that the possibility of such a threat is a deterrent to would-be mass shooters.

From behind a concrete column, from under an overturned café table, perhaps in the terror of a face to face confrontation, one or more of the Paris terrorists could have met a most surprising and decisive end in the form of a NATO 9 mm. pistol round to the head. Brave armed citizens have delivered that kind of salvation in Philadelphia, Colorado Springs, Pearl, Mississippi, Grundy, Virginia, and other places in America whose people don’t criminalize armed self-defense.

True, these documented mass shootings played out on a lesser scale, but the principle was the same—courageous armed citizens on the scene clearly limited the bloodshed and saved lives.

But not in Paris. And not in America’s so-called gun free zones, which are, as famed firearms trainer Massad Ayoob tells us, “hunting preserves for psychopaths who prey on humans.”

As France counts its dead and prepares for the future, all the world must take the lesson to heart. We here in America know that similar attacks within our borders are a certainty.  Large cities that have declared themselves gun-free zones will likely be the preferred targets for American terrorists when they choose to attack.

America waits, and those who can, prepare.