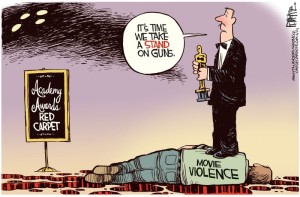 It is a common sense belief that the pervasiveness of violence in media can desensitize us to violence in society and surely must influence impressionable youth.  Perhaps because of that, our entertainment-industrial complex regularly reports studies telling us that “the evidence just isn’t there”—to “move on, nothing to see here”.

Then how can the American Academy of Child & Adolescent Psychiatry find it “quite compelling that children’s exposure to media violence plays an important role in the etiology of violent behavior”?

It may be impossible to prove a cause and effect relationship of exposure to depictions of violence on the frequency of violent crimes.  We couldn’t raise hundreds of children watching only Peckinpah and Tarantino movies in order to compare their adult rates of violence to those raised on nothing but Disney and Pixar animations.

Yet it’s perfectly obvious that this matters.  Adam Lanza’s life goals weren’t enhanced by the hours he spent locked in his room playing violent video games. And we do know that children who are abused are much more likely to grow up to abuse others, that people copy celebrity suicides and teens are more suicidal after acquaintances suicide.

Malcolm Gladwell suggests that repeated school shootings by students could be understood as serially motivated by prior ones, as sort of a “slow-motion, ever evolving riot”. In his thinking, the readiest aggressors with the lowest thresholds for violence began them but their influence recruits others whose higher thresholds are breached and they then join in this anti-social group identification.

Of course, the entertainment industry is filled with rich and powerful people who are nearly all anti-gun—for us, not for their own expensive private security.  (Maybe there’s a reason that “plutocracy” rhymes with “hypocrisy”.)

How often do you watch a drama in which a private gun owner was the hero, saving the day by using his sidearm to defend innocent life? Far less often than it actually happens, that’s for sure.

This is an industry that has, since 2000, published a Firearm Depiction Tip Sheet to guide production staff in how to show firearms in the most undesirable ways.  It goes to “showrunners, development executives, writers, producers and directors in film and television” and hundreds more in all stages of television show development.

It advises that “all types of programming. . . can find an angle of the [‘gun violence’] issue that will appeal to their audience”.  Unsurprisingly, this work is funded by The Joyce Foundation, with input from all the usual anti-gun suspects (the Brady Campaign, the Coalition to Stop Gun Violence, the Million Mom March, the Violence Policy Center and The Annenberg Foundation).

According to NRA-ILA’s report, “of the more than 30 ‘suggestions’. . .the vast majority seek to portray legitimate firearm ownership as destructive and dangerous.”  These include people “being too frozen in fear” to use their guns, “being overpowered by the attacker who then uses the gun against him”, “feeling less safe. . .when they find their neighbors becoming increasingly armed”, and finding “that having guns in the house may actually increase the possibility of home invasion robbery.”

You can read more of these at The Daily Caller, where Dan Griffin broke the story.  But you couldn’t read them on the Entertainment Industries Council website after that.  Once their “suggestions” became public knowledge, the site and page became unavailable.  (As of March 23, the page and site were again accessible.)

The most interesting aspect of this, to return to our opening question, may be that we should believe that “entertainment. . .may influence real-life decisions and beliefs” (i.e., actions).  But. . .but. . .haven’t they always told us that their violent stories just mirror life, they don’t actually influence anyone or promote the behaviors shown?!

The entertainment industry is using its power—repeatedly and insistently, though subtly—to try to normalize our feeling anxious and fearful about firearms.  But then couldn’t similar approaches foster the development of real gun sense and safety?