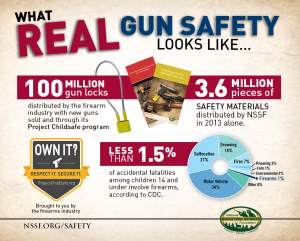 For years now media stories have shifted from calls for gun control in favor of the kinder, gentler term “gun safety”. So it’s not really a new trend. The change was a carefully calculated decision of gun prohibitionists and their many sympathizers in the large media outlets.

Gun control, it turns out, is a red flag to that substantial number of the American public who cherish the right to keep and bear arms. They rightly see gun control as people control, since gun control laws are generally ignored by real criminals. That leaves only the law-abiding as the target of such people control laws, a reality that the public increasingly sees as illogical at best.

But over the last year or two there seems to be a surge in the use of the code term “gun safety”. It’s become standard Obama doubletalk. Gun-grabbing plutocrat Michael Bloomberg tacked it onto the name of his latest AstroTurf gun control lobbying group, Everytown for Gun Safety. So a reminder is in order—the two are not the same. Gun safety is what we all strive for. It’s the set of attitudes and practices that seek to minimize accidental (that’s the keyword here) injuries and deaths caused by improper use of firearms.

Gun control, on the other hand, is a political term. It refers exclusively to actions of the government, actions intended to limit the ownership and use of guns. As a political goal gun control has always meant one thing—gun prohibition. This has been shown repeatedly by the actions of the gun control political movement. In the movement’s early days public health gun control zealots freely spoke of their ultimate goal:

And the founder of the Brady Campaign* (then known as Handgun Control, Inc.) carefully outlined that organization’s goals as early as 1976:

“We’re going to have to take one step at a time, and the first step is necessarily—given the political realities—going to be very modest… [W]e’ll have to start working again to strengthen that law, and then again to strengthen the next law, and maybe again and again. Right now, though, we’d be satisfied not with half a loaf but with a slice. Our ultimate goal—total control of handguns in the United States—is going to take time… The first problem is to slow down the number of handguns being produced and sold in this country. The second problem is to get handguns registered. The final problem is to make possession of all handguns and all handgun ammunition—except for the military, police, licensed security guards, licensed sporting clubs, and licensed gun collectors—totally illegal.”—Richard Harris, A Reporter at Large: Handguns, New Yorker, July 26, 1976, at 53, 58 (quoting Pete Shields, founder of Handgun Control, Inc.)

So if gun safety is not gun control, what is it? It has long been the primary goal of gun owners, whose organizations like the National Rifle Association (NRA) and its state affiliates have spent tons of money and volunteer time teaching people about it. The National Shooting Sports Foundation (NSSF), as the nation’s firearms industry association, has shared the burden of teaching the techniques of avoiding accidental firearm injuries to the public—real gun safety.

If President Obama truly wanted Americans to have more gun safety instead of more gun safety laws (wink, wink, nudge, nudge) he would sing the praises of the NRA and NSSF across the fruited plain. Fat chance.

Whether it’s the NRA’s Eddie Eagle GunSafe Program® or Youth Programs or the NSSF’s Project ChildSafe and firearms safety library, gun owners and the gun industry have contributed to building a culture of safety. Obama complains that he hasn’t been successful in passing gun “safety” laws, but the NRA and NSSF can boast success with the real thing— firearm accidents have been declining for decades and are now at an all-time low.

* In June The Brady Campaign’s litigating arm (Brady Center) was berated by a Colorado judge for its part in a politically motivated lawsuit against gun dealers for allegedly causing accused mass killer James Holmes to open fire in a movie theater in Aurora, Colorado. The judge threw out their lawsuit and ordered the Brady-backed plaintiffs to pay over $200,000 for legal fees to the vindicated defendants.