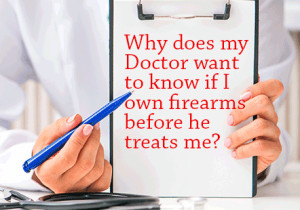 As the 11th Circuit Court of Appeals prepares for the latest round in the legal battle over Florida’s Firearm Owners’ Privacy Act (FOPA), one issue is being addressed in depth for the first time. An amicus curiae brief just filed by the Second Amendment Foundation and Citizens Committee for the Right to Keep and Bear Arms shows the real reason that Floridians were outraged when an Ocala, Florida pediatrician

in 2010 kicked a young mother and her baby out of his practice for daring to object to his inappropriate questioning about guns.

The brief’s core principle is this-doctors should not take advantage of their position of trust, superior knowledge, and power over a patient to push a political agenda of gun control.

In a commentary two California pediatricians protest the idea that the doctor-patient relationship is unequal, especially in the age of instant online access to medical information. Doctors welcome the empowerment of patients with the vast resource of medical information on the internet. Dr. Google is our friend too.

And of course it’s politically incorrect to suggest that the doctor-patient relationship is by its nature unequal. But if it isn’t unequal, why do Americans so vigorously hold every doctor to a higher standard of conduct? It’s because at some point a sick or injured and often frightened patient puts his life in her hands. The relationship is not coercive. The inequality has nothing to do with innate human value. It’s just a fact made necessary by the gravity of the job.

Accordingly, medical societies’ official policies and state laws strictly define acceptable boundaries of physician conduct. Courts give great latitude to patients to haul a doctor into court on the slightest accusation of malpractice or misconduct. A wrongfully sued doctor has, in reality, little or no recourse under the law.

Medical boards are authorized to investigate patient complaints, forcing the doctor to hire counsel to defend his reputation. Business rating services like Yelp allow patients to trash their physicians, who are then prevented by privacy laws from responding.

A doctor involved in any romantic relationship with a patient faces a range of punishments, from loss of license (and livelihood) to jail time. All of these sanctions are intended to protect patients and to put them on an equal footing with the doctor.

Opponents of the Florida law build their case on an objection that the law violates the First Amendment free speech right of doctors treating their patients. But the simple text of the law debunks this claim: “a health care practitioner or health care facility that in good faith believes that this information [about firearms] is relevant to the patient’s medical care or safety, or the safety of others, may make such a verbal or written inquiry.”

In other words, the law gives almost total freedom to the doctor. The key word is “relevant.” And that is where doctors, especially pediatricians, got themselves into trouble serious enough that the Florida legislature reined them in.

Doctors started talking to their patients about guns in the 1990s, prompted by policies of their specialty medical organizations. The American Medical Association, the American College of Physicians, and especially the American Academy of Pediatrics (AAP) launched deliberate campaigns against gun ownership. Those policies included urging gun bans, regulating guns as consumer products, banning most rifles designed and made after the Korean War, and even urging doctors to pressure families to get rid of their guns. The AAP even worked with the Center to Prevent Handgun Violence, the educational branch of Handgun Control, Inc., then the leading gun ban lobby. Handgun Control, Inc. is known today as the Brady Campaign.

Even now the American Academy of Pediatrics policy on guns endorses as best practice “the absence of guns from homes and communities.” This is a more or less clear recommendation that families should give up one of their enumerated civil rights, the right to own firearms. Nor do medical school and residency include any genuine firearm safety training that might give doctors the slightest claim to authority on the subject.

It’s no wonder that Floridians were furious at meddling doctors who see themselves as foot soldiers in organized medicine’s culture war on gun owners. Some considered speaking to a legal firm such as Essayli & Brown to help raise the matter before this court case came to light. After all, your doctor’s job is to help you heal and thrive, not to shame and harass you for exercising one of your civil rights.

-Timothy Wheeler, MD is director of Doctors for Responsible Gun Ownership, a project of the Second Amendment Foundation.