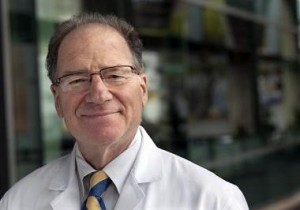 Dr. Frederick P. Rivara believes guns should be more stringently controlled.  He has nothing but contempt for those who value the Second Amendment. And he thinks people who keep firearms for self-protection have the morals of murderers.  Some newcomers to the public health gun control culture wars may find all this hard to believe in a respected pediatrician and editor of a leading medical journal (JAMA Pediatrics).  But watch this video to judge for yourself (Rivara’s presentation begins at 2 minutes, 20 seconds into the video).

An academic pediatrician and founding member of the public health gun prohibition movement, Frederick P. Rivara, MD, MPH shares his research on “gun violence,” his prejudice against gun owners, and his disregard for scientific honesty in a grand rounds presentation to an audience at Seattle Children’s Hospital. Grand rounds is a medical institution wherein doctors share their expertise in a lecture with their colleagues in an informal environment.

Here Rivara’s audience is a sympathetic group of various health professionals.  They giggle when he mocks the Second Amendment at 15:45 in the video and ridicules New Hampshire’s motto “Live Free or Die” at 7:10.  In the audience Q & A session at the end of Rivara’s presentation (49:00), one timid fellow offers “I’m from Texas. I’m happy to be here”, which garners guffaws from the audience.

At 39:40 Rivara derides the NRA’s opposition to requiring all guns to be so-called “smart guns.”  DRGO is one of many to debunk this fraudulent back-door gun ban ploy.  But Rivara not only champions it, he makes fun of those who believe in their right to self-defense, citing their objection as “In the crucial moment when you need to shoot the red intruder [sic], the gun is gonna fail.”  The red intruder? Where is your mind, Dr. Rivara? I’m not sure we want to know.

In a comparison of auto safety standards to the perennial anti-gunner’s wish list item of similar gun “safety” standards, Rivara makes a passing reference at 5:50 to Ralph Nader, “who everybody hates because of the 2008 election”.  Yes, he actually said that, presumably because of Nader’s spoiler role in splitting the liberal vote with his quixotic presidential candidacy.  This supposedly objective researcher sprinkles his entire presentation with caustic partisan barbs like this.  Such cavalier conduct may bring Rivara the love of his amen chorus of fellow gun control advocates, but it really doesn’t help his image as a scientist we can trust.

Rivara is best known for coauthoring with Arthur Kellermann a 1993 article in the New England Journal of Medicine arguing that guns in the home make a person 2.7 times as likely to be a homicide victim as in a home with no guns.

The article was controversial from the beginning. The authors limited their study to a population of predominantly inner city residents, all of whom had been murdered in their own homes. Then they generalized their conclusions from that dysfunctional, crime-prone group to all of America’s gun owners.  They used the case-control study method, which can be helpful in broad-stroke descriptions of populations at risk for infectious disease, but is considered unreliable for determining causation. And in any case it is based on the ridiculous “guns are a virus” epidemiological model that the authors use as an excuse to study guns, a subject way beyond their expertise.

A more complete discussion of the faults of the Kellermann-Rivara article can be found in “Public Health Gun Control: A Brief History—Part II.”  Despite Rivara’s article being riddled with methodological errors and outright bias, gun control activists and their many supporters in mainstream media outlets to this day trumpet the “three times fallacy” as truth.  But the outrageous twisting of science for political ends and the CDC’s funding of the study helped convince Congress to defund further such junk science at the CDC.

Rivara’s most recent contribution to the anti-gun medical literature was part of the blizzard of anti-gun op-eds, political grandstanding, and chest-beating triggered by the Newtown massacre.  Immediately following the mass shooting, the famously anti-gun Journal of the American Medical Association (JAMA) published what amounts to a mob-rousing political hit piece against gun owners. Coauthored with fellow career anti-gun researcher Garen Wintemute, the article shamelessly harnessed public outrage to push a laundry list of gun control measures and to plead for restoration of federal funding of gun research, which is to say anti-gun rights advocacy research. Naturally, Rivara didn’t write a word about the real reasons Congress withdrew that funding.

Nor does Rivara miss a chance in this ground rounds presentation to hammer once again on the CDC defunding bugaboo (see 41:40). All we can tell him is take two aspirins and call us in another 20 years. We have a long memory.

But the most revealing part of Rivara’s presentation comes at 28:38, when he makes a plea to “change norms around gun possession.” He clarifies his intentions by showing what he thinks armed self-defense means to Americans:

“Having a gun and using it for self protection…that means they actually would go out to the front door and kill somebody.  It’s amazing to really think about that…that you’d have a gun and go out and try to kill somebody.”

And here lies the kernel of truth, the moment of clarity, for those who had any remaining doubts about the motives of public health gun control advocates.  They simply do not understand gun owners; nor do they want to understand them. Instead, they prefer to nurture their own morbid fantasies about gun owners, to believe that they are not only ignorant, but evil.  These ivory tower elitists operate in a moral universe entirely isolated from mainstream America, which most certainly does believe in the right of armed self-defense.

If a picture is worth a thousand words, then a video is worth a million. Go and see it for yourself