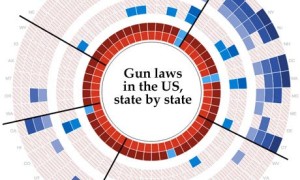 Part of our mission at DRGO is to keep you up-to-date on research about the use and abuse of firearms.  We take some satisfaction in revealing when “research” turns out to be made of recycled memes, illogical methods and forgone conclusions.

So when this year’s annual Epidemiologic Reviews (Vol. 38) was announced in March, we were thrilled by the opportunity to criticize 9 gun-related studies all in one convenient place.  Then we felt overwhelmed by the challenge that would be.

Thus we were delighted to hear from our friend, Caillin Langmann, MD, PhD at McMaster University Faculty of Health Sciences, who took a close look at one of these articles, What Do We Know About the Association Between Firearm Legislation and Firearm-Related Injuries?  Dr. Langmann is an assistant clinical professor in McMaster’s Division of Emergency Medicine, a clinician (the MD) and researcher (the PhD).

The short version is that you can find “associations” between many things, which may not mean anything.

The longer explanation begins with news coverage about the review.  Quoting from Science Daily, “While the research did not conclusively prove that restrictions, or relaxation of laws, reduce gun deaths, the results indicate that gun violence tended to decline after countries passed new restrictions on gun purchasing and ownership.”

Observe the cautioius use of “did not conclusively prove. . .results indicate. . .tended to”.  Now that’s not uncommon, since scientific work usually adds very incrementally to knowledge rather than definitively removing all doubt in some way beyond questioning.  Still, there’s a lot of wiggle room.

But, from Dr. Langmann:

The paper’s abstract is freely available but, in a common offense to scientific review, the full article is only available behind a pay wall for a minimum of $40.  Those of us with academic appointments can get it via our university libraries, but we can’t disseminate it further.

We can’t vouch for problems in the rest of Epidemiologic Reviews’ eight other investigations into such things as the relationship between firearms use and alcohol and substance abuse, suicide, domestic violence, storage requirements, “transmission” of behaviors across social networks, and the effectiveness of possible interventions.  But it’s not unlikely that such mistakes in design and analysis are frequent there, because they are not uncommon in scientific research generally and are rife throughout social science research like this.

I have to agree with Santaella et al that “High-quality research overcoming limitations of existing studies in this field would lead to a better understanding of what interventions are more likely to work given local contexts.”  Higher-quality and better than this review at least.

We can’t pick through every one of the stream of publications coming our way that suggest inherent bias for restrictive gun laws.  We have lives, too.  But we hope examples like this show the sort of thinking (or lack thereof) that is too often obvious in such work.

It takes expert reading like Dr. Langmann’s to pinpoint the flaws, but the principle remains: even if “association” can be shown, that is far from proving causation.

Check out our resource document, Reading ‘Gun Violence’ Research Critically.  If it walks like an anti-gun duck and talks like one, it probably is anti-gun quackery.