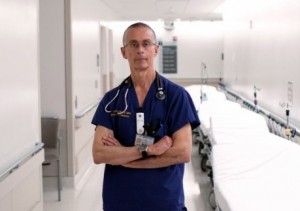 The strategy of public health gun prohibitionists has long been to convince Americans that guns are “dirty, deadly, and banned”, as former Centers for Disease Control official Mark Rosenberg once said. We have yet another example of advocacy research toward this goal with a new article in Preventive Medicine from University of California-Davis anti-gun researcher Garen Wintemute. His article “Alcohol Misuse, Firearm Violence Perpetration, and Public Policy in the United States” aims to provide an appearance of scientific cover for politicians seeking novel ways to outlaw gun ownership.

A career public health crusader against gun ownership, Wintemute has carved out a niche writing well-researched and liberally referenced medical articles about subgroups of people who shouldn’t be allowed to have guns. A laudatory article in Nature called him the “Gun Fighter” (get it?) and makes it pretty clear that Wintemute has some deep-seated personal biases against guns. It details his mentorship by Johns Hopkins University public health anti-gun rights advocate Stephen Teret, including their first joint project—a law review article laying out a plan for suing gun manufacturers (Teret is a former trial lawyer). Even then, Wintemute’s favorite prescription was the kind that’s backed up by force of law.

Establishing categories of prohibited persons has always been a tactic for banning firearms. America’s first gun control laws were aimed at African-Americans and other minority populations. Updated for the newer public health strategy, this progressive approach to disarmament involves first designating a subgroup such as young people, the mentally ill, or in this case, problem drinkers. Next comes establishing proof, often by questionable methods, that people in those categories are statistically more likely to misuse firearms. The last step is laws banning firearm ownership not just by the most dangerous outliers, but by all members of those groups.

Wintemute catalogs the usual statistics about firearms in civilian possession in the United States. Then he does the same for alcohol use and misuse, coming up with estimates of 11.7 million firearm owners who binge drink and 3.6 million who drink heavily in any 30-day period. In subsequent sections Wintemute cites scientific articles that, to varying degrees, associate firearm misuse with alcohol misuse. He concludes with a broadly general policy prescription: “Properly-crafted policies addressing firearm access for persons who misuse alcohol are likely to be effective…”

In its full form, then, such policies could revoke the Second Amendment rights of those 11.7 million binge drinkers, with the 3.6 million heavy drinkers thrown in if legislators want to be thorough.

This approach is all the more treacherous because there is some element of truth to it. The vast and heterogeneous group of “mental illness” can range from a mild anxiety or depressive disorder to a dangerously delusional person like James Holmes, the accused mass murderer in Colorado. Young persons can either be well-coached and safe in handling firearms or lethally dangerous, depending on whether they are taught by a parent or by fellow gang members. Problem drinkers can range from the normal functioning of a well-compensated heavy drinker to dangerously delusional or depressive mental states.

Few would oppose limitations on the right to own firearms at the extremes of those groups—the gangbangers and the James Holmeses. The problem, as always, comes in the tendency of gun prohibitionists to abuse that power to disarm perfectly responsible and law-abiding gun owners. A current example is President Obama misusing his executive power to revoke the Second Amendment rights of veterans who are wrongfully marked by the Department of Veterans Affairs as “mentally defective” because they need help managing their benefits and finances.

Finally, researchers like Wintemute would stir much less suspicion among American gun owners if they would show support or even a shred of acknowledgment of Americans’ civil right of firearm ownership. But Wintemute’s only mention of such gun rights affirmations as the Supreme Court’s Heller and McDonald decisions is to assure readers that they still allow restrictions on the right to keep and bear arms. He sees these landmark civil rights decisions as obstacles to be worked around. That says a lot about his real intentions.

[Published with permission of TheGunMag, which will publish this article in its July issue.]