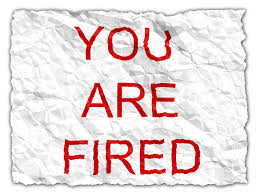 The anti-firearm activist and researcher Bindu Kalesan made headlines recently with her latest advocacy piece, which DRGO’s Publication Review Team gutted in Tuesday’s blog entry.  We take this opportunity to show how Kalesan is just another practitioner of a long tradition of scientific disgrace—abusing scientific credentials to advance a culture war against gun owners. And this is how the public health gun prohibition movement’s future is in doubt under our new political leadership.

In her Injury Prevention article, “School Shootings during 2013-2015 in the USA”, Kalesan and her coauthors intends to convince readers that states spending more money on mental health treatment and on education, as well as requiring background checks for firearm purchases, have fewer school shootings.  As flawed as the article is, mainstream media outlets eagerly picked up the message and trumpeted it to the nation. The corrupt system of junk science findings to media outlets to the public (and their elected representatives) worked.

According to the website of Gun Violence Survivors Foundation, Kalesan is its Vice President.  The website claims to help “survivors of gun violence in an effort to help them heal mentally and emotionally.”  Kalesan’s biosketch on the website relates in the murky patter of the social sciences her goals of “pursuing research to determine the social, individual and political factors that drive the increase or decrease in firearm injury in each state. Eventually, her goals are to minimize the preventable injuries and deaths due to firearm violence.”

If her modus operandi is anything like that of her fellow anti-gun rights advocacy researchers—Arthur Kellermann, Garen Wintemute, David Hemenway, and others—“minimiz[ing] the preventable injuries and deaths due to firearm violence” is code for working to pass more and more gun control laws. 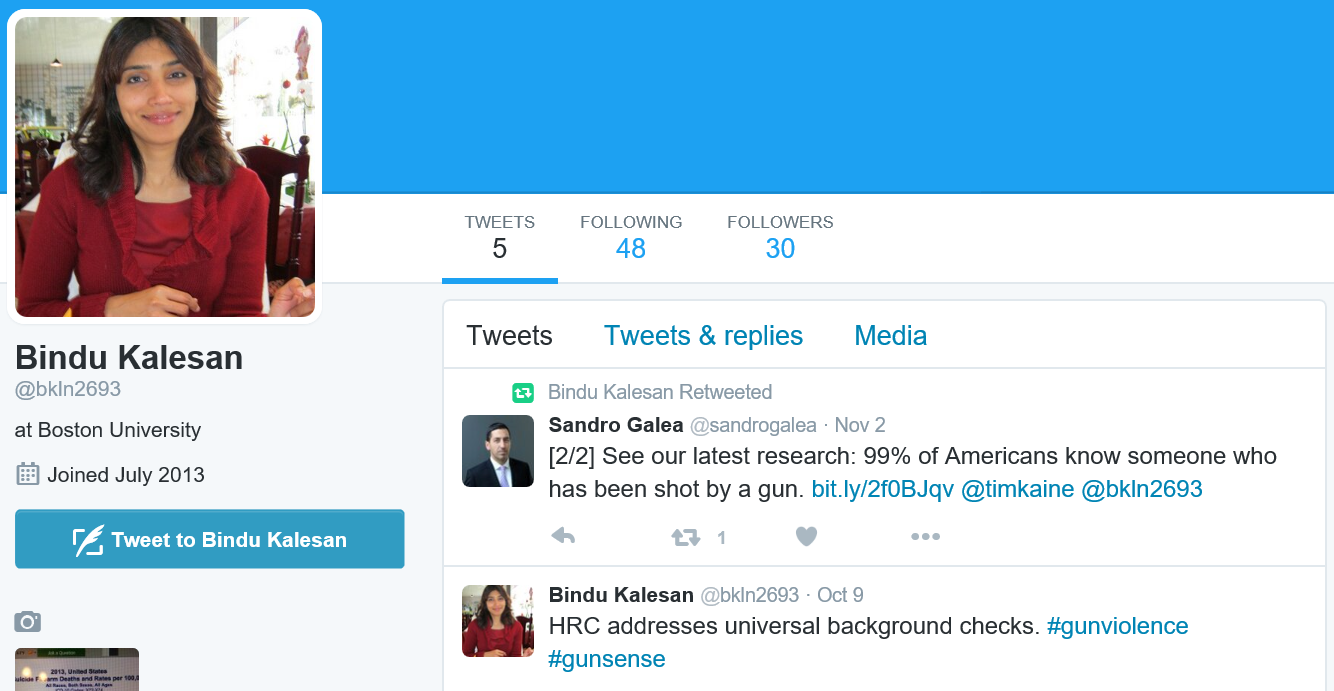 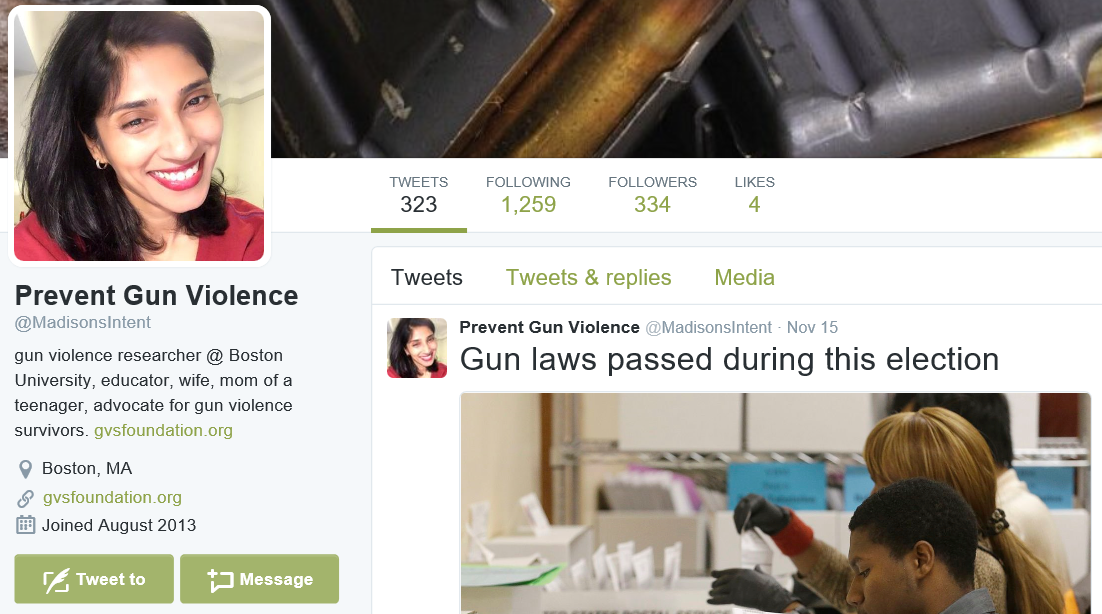 Not surprisingly, the gun laws she highlights are not the many state laws strengthening gun rights, such as Ohio’s recently passed SB 199.  Look for yourself at her Twitter feed and note Kalesan’s interest in the gun control debate—specifically the side urging more gun control.

Further insight into Kalesan’s mindset about guns is shown by her retweet (see the first tweet in the @bkln2693 account above) of a ridiculous and meaningless factoid: “See our latest research: 99% of Americans know someone who has been shot by a gun.” Anyone who says “shot by a gun” to mean “shot with a gun” has bizarre thought processes causing them to attribute human qualities of will and action to an inert chunk of metal and plastic.  This particular quirk of terminology is a reliable indicator of an abnormal fear of guns, i.e. hoplophobia.

Kalesan has shown in a previous Injury Prevention article her contempt for the very culture of American gun ownership, going so far as to suggest ways to snuff it out.  And the editorial staff is dominated by foreigners unfamiliar with and likely hostile to America’s constitutional right to keep and bear arms. They link their “collection of content on gun violence” directly from the home page, the only topic so highlighted. And we are supposed to trust gun research coming from such a tainted environment?

As if atrociously prejudiced science and bigotry against gun owners weren’t enough, Kalesan has left a social media trail removing any doubt about her hatred of gun owners.  Here’s a post from the Facebook page of a nasty entity calling itself Gun Control. Now. that Kalesan shared approvingly on her own Facebook page: 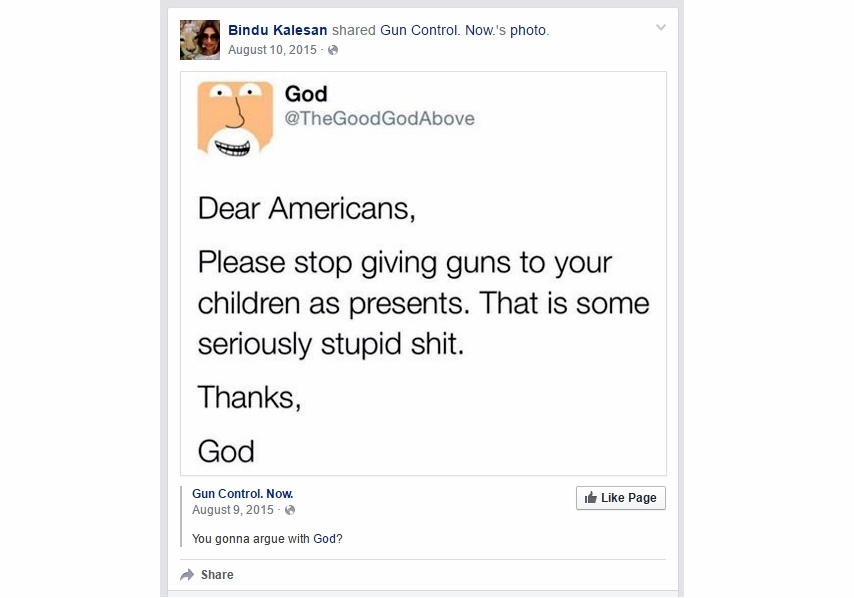 Apparently Kalesan neither knows nor cares that American parents have been giving guns as gifts to their sons and daughters since before the Founding, and that careful parental initiation into gun ownership ensures those children will be less likely to get into trouble with the law than kids who don’t get such good parenting.

Kalesan posted even more racist and hoplophobic Facebook material that we documented here last March. In one, she accuses DRGO of being “just terrible people . . . [who] need to be reported.”   In another, she posts approvingly a bizarre Huffington Post article by her Boston University public health collaborator Dr. Sandro Galea, in which he describes the “disease” of secondosis—meaning, the Second Amendment as “a killer disease” that must be stamped out.

Kalesan leaves no doubt that her consuming hatred of American firearm freedom disqualifies her as an objective scientist.  If she wants to work as an anti-civil rights activist for the gun control lobby, that is her dubious right.  But Bindu Kalesan should be fired from Boston University School of Medicine and should never hold an academic position again.

Whatever one thinks of the outcome of the recent presidential election, one area of consensus seems to emerge.  A very large proportion of the American public is tired of being talked down to, of having their American traditions and culture ridiculed by urban elitists like Bindu Kalesan and their surrogates in government.  Already the U.S. House of Representatives has reconstituted its Second Amendment Caucus. With a Republican majority in both of the political branches of federal government and Republican governors in around two thirds of the states, the long train of abuses of the Second Amendment is coming to a halt.

Now is the time for our Congress to remember the past abuses of taxpayer dollars spent on such anti-gun rights junk science as that produced by Bindu Kalesan.  There were good reasons for Congress cutting off funding for gun control advocacy at the Centers for Disease Control.  A more definitive law is needed— one that makes it a federal crime to use Americans’ tax money to produce junk science intended to deprive them of their own civil right to own firearms.