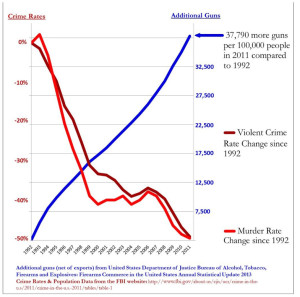 [Editor’s Note: The following article from Dr. Miguel Faria critiquing the below referenced Hemenway et al paper in the American Journal of Preventive Medicine was recently published at haciendapub.com and is republished here with the author’s permission.]

Ecologic studies are notorious for inherent errors of methodology, confounding variables, and magnifying other sample biases intrinsic to fault-prone, population-based epidemiological studies. But in the paper, “Firearm Ownership and Violent Crime in the U.S.—An Ecologic Study,” recently published in the American Journal of Preventive Medicine,[1] we find additional problems resulting from the well known proclivity of many public health researchers of using preordained, result-oriented research to push for their personal views favoring gun control and militating for disarming law-abiding citizens, purportedly to reduce gun crime perpetrated by the not-so-law-abiding felons and career criminals who, as a matter of course, ignore and flout the law.[2-4]

From the outset the article reveals the authors’ biases. The study begins by listing the frightening statistics of gun homicides in the U.S. with the usual obligatory comparison with other “industrialized nations (mostly Europe),” neglecting world demographics, migrations, socioeconomics, history and geography, which brings to mind our next door neighbor Mexico, as well as Brazil and most of the Western hemisphere, not to mention far away Russia and much of the world.[5-6]  The discussion proceeds with another obligatory phraseology, “firearm availability and violent crime.” Considering history and geopolitics, it may be worth mentioning that what has been termed “America’s gun culture” may have contributed in part to the liberation of Europeans from the Nazis during World War II and subsequently for decades protected all of indulgent and effete Western Europe from the menacing Soviet Red Army and the threat of the T-54/55 Soviet tanks rolling and over-running the European landscape during the cold war.[7-9]

To the authors’ credit a minor effort was made to “capture data” on demographics and socioeconomics but the information is lost in the cocktail of bewilderingly complex analytical techniques and large data sets created by these ecological concoctions.[10–11] But in reality firearms and violence are the sole issues under discussion; no other societal causes are remotely considered for the endemic violence in the U.S., such as the decline in educational level, the influence of the popular culture, TV violence, increasing rates of single parenthood and broken families, drug trafficking and gang-related violence, permissive criminal justice system, the state of dependency and alienation fostered by the welfare state — a veritable cultural regression perpetuating immorality and violence[12] that journalist Cal Thomas wrote in a recent column is morally “rotting from within.”[13]

In this study, though, homicides and guns are the ultimate bogeymen, but no distinction is made to separate criminal homicides from justifiable gun homicides or self-defense shootings. And no significant effort was made to delineate the beneficial aspects (preventive or defensive uses) of gun ownership in incidents involving assaults, robberies, and homicides — i.e., the very topics supposedly of interest to the researchers. Nevertheless, the authors purportedly reached alarming conclusions —namely that states with higher levels of gun ownership have an increased risk for assaults and robberies perpetrated with firearms.[1]

Although the flaws of the ecologic methodology are evident, the omissions are even more damaging to the study. The seminal work in these areas conducted and published by researcher John Lott is not cited or even mentioned.[3] And one can not see the forest for the trees: The fact is that while Americans continue to purchase and possess more private firearms than ever in our history, rates of homicide and violent crimes have been steadily diminishing for several decades because more guns, at least in the hands of the law‑abiding citizens, do not translate into more crime.[3-4] The number of private firearms has in fact increased from approximately 200 million in 1995 to 300 million in 2012, with a concomitant decrease in both homicides and violent crimes since 1992 to the present.[12,14] Moreover, as shown by the work of John Lott, Gary Kleck, and others, firearms in the hands of law-abiding citizens actually decrease crime. There is considerable historical evidence that gun ownership in the hands of citizens also protects their property and their freedom.[7-9] The problem with endemic crime is not which states have the most guns but with irresponsible gun ownership and the proportion of guns in the hands of criminal elements.[12] Despite laws to the effect, we as a society have not kept guns from falling into the wrong hands because of our broken criminal justice and mental health systems, not to mention an overall deteriorating moral value system, which is obvious to anyone who cares to reflect and evaluate our descent in cultural devolution.[12-13]

This study is subject to similar flaws as those repeatedly found in much of the public health literature dealing with guns and violence, including one study I personally analyzed more than a decade ago in which researcher Hemenway was also one of the authors.[15-16] No significant effort was made to address some of the objections many of us have made regarding bias and politicization of gun research in public health methodology. Consequently, we should not be surprised that Congress in 1997 after carefully studying the issue defunded and thereafter wisely refused to resume funding “gun research”— or rather gun control propaganda masquerading as gun violence research.[17-18]

Doctors for Responsible Gun Ownership (DRGO) as well as many other independent investigators have been documenting this fact for years;[19-20] but if the question is asked about who is responsible for defunding gun research, public health apologists will answer that the NRA is solely responsible![21-22]

Independent investigators have provided Congress over the years with truck loads of evidence that much of the gun research conducted by public health researchers was junk science, biased research promulgated by the ideologically committed as well as self-serving public health officials in cahoots with the very public relations-conscious leaders of the AMA, “organized medicine,” and their publications.[11,14,16-20,23]

It should also be of interest that private researchers, particularly those associated or sponsored by the pharmaceutical and chemical industries, are frequently disparaged by those in public health service, as if the fiduciary association of the former immediately taints their integrity, work, and conclusions. But why is it not so the other way around, for those receiving tax money or funded by private tax-exempt foundations, such as the Joyce Foundation, with ideological axes to grind? And why do those same gun researchers decade after decade keep telling us that more studies are needed (and additional funding necessary) — militating in their own financial self-interests as well as subsidizing their ideological agendas? These are good questions whose answers may save taxpayers bundles of money and in the long term, perhaps, even their freedom!