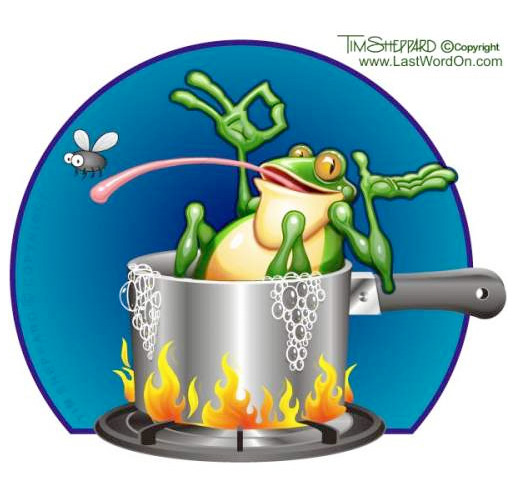 [Editor: On the occasions of our November elections and last week’s farewell to Fidel Castro, we present a 2-part series by Dr. Faria, reprinted by permission from Hacienda Publishing, with a message that America can always use.  Part 2 appears Thursday.]

In a previous article, “European social democracies and gun control,” I wrote that many Americans are extremely naïve when it comes to trusting the government with their liberties. In fact, there is an interesting dichotomy because citizens mistrust the economic acumen of government and don’t trust it with their wallets, but it is a different story with personal liberty!

Thus, we continue to hear the expression, “if you have nothing to hide, you have nothing to fear.” The fact is Americans have lived in freedom for so long, we are not only too trusting with liberty, but like the proverbial frog in the warm bath, don’t even notice when our freedoms are being eroded piecemeal.

I do not know the Telegraph letter-writer, Geraldine Parker or her politics, but she received an avalanche of verbal reprimands and heaps of derision from both liberals and conservatives, both in print and online, for her temerity to express emotionally her concerns about personal privacy.

Despite the accusations of hysteria and paranoia (and admittedly I do have a soft spot for defending the underdog), the fact remains that even paranoids have enemies, as Israeli Prime Minister Golda Meir reminded Secretary of State Henry Kissinger during his celebrated 1973 “shuttle diplomacy,” when he wanted Israel to make territorial concessions. Had Israel not held control of the territories gained in the 1967 conflict, the Jewish State would have been pushed into the sea in the initially successful surprise attack of the 1973 Yom Kippur War!

Mr. Jim Huber was one of the chastisers of Ms Parker. He received his own energetic reproof from an irate on-line reader, Bob White, who wrote:

“The Patriot Act and the War on Drugs have gutted the 4th Amendment. Our government and law enforcement monitor our phone calls, internet, mail, what books you read, all without a warrant signed by a judge. Road blocks take place daily under which we can be searched without a warrant. Under the ‘sneak and peek’ provision of the Patriot Act, our homes can be searched without our even knowing about it. It’s easy to see, Mr. Huber, that you are one of the sheep who won’t even bleat as you are led to be fleeced or slaughtered.”

These are strong words but White has a point as to the loss of American freedom. Consider the revelations that have come to light on domestic surveillance; the political abuses of the IRS targeting conservatives; abuses of the ATF and other federal agencies, etc. And if still in doubt, try to exit the country or even fly outside the U.S., not with a gun in your travel bag — but with your hard-earned money — and see what happens!

All of this loss of freedom has taken place in the name of security and safety, taken place with little resistance from the uninformed and acquiescent general public — and despite Ben Franklin’s admonition! [Editor: “A Republic, if you can keep it.”]  History confirms the danger of government run amok and exercising too much power. And for those who still hold to the naïveté, “if you have nothing to hide, you have nothing to fear,” I will conclude with a summation of what might happen to (and should be feared by) the trusting and unwary citizen — as a result of the cryptic and myriad of laws and regulations in the federal books in the concluding Part 2 of this commentary.