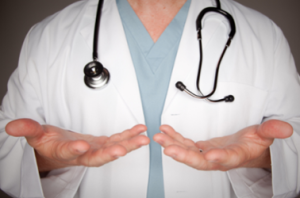 Yes, the general public, we as Americans, trust our doctors and other health care workers with our lives, every day.  Wouldn’t we then trust those same doctors to defend against deadly violence in a hospital?  Yet the vast majority of hospitals across this nation will not trust those same physicians who have a permit to carry a weapon for defense of themselves, patients and staff, to do so in the hospital.

Do we find too much cognitive dissonance between a doctor being the one who saves us or keeps us from ill health, and that same person being the one who stops a violent offender in defense of our lives? I don’t think so. Less than a year ago a Gallup poll found nurses, doctors and pharmacists were the professions people felt were highest in honesty and ethics. Sounds like trust to me.

Concealed carry holders have been found to be 5.7-13.5 times less likely to commit a crime than the general public (these are people we can trust).  Is it so hard for Americans to put these two groups of people together?  Do they believe that the Hippocratic Oath stating “First do no harm” means that no “harm” is ever done in the process of medicine?

Let’s take a simple and life-saving appendix surgery.  The surgeon has to cut open the body, take the appendix out, and then repair the holes.  Is there damage done?  Of course there is, but the overall benefit outweighs the damage that was done to the body and in the end the patient improves.

Is this not the same as when a violent murderer enters a hospital or other healthcare facility and begins harming innocent people?  He is the diseased appendix, he cannot be reasoned with, he cannot be stopped by saying please—he must be met with equal or greater force or he will continue to harm others.

Dr. Lee Silverman in July 2014 near Philadelphia must have known this when a mentally ill patient walked past the “gun-free zone” signs and shot and killed his caseworker and wounded Dr. Silverman.  Dr. Silverman had his weapon on hand despite the rules against it.  He must have known (as many of us do) that violent criminals do not obey the signs and when they decide to bring a weapon into a “gun-free zone” they believe they will be the only one with a gun and will be able to do whatever damage they wish.

He must have realized at that critical second, despite being a psychiatrist and probably skilled at reasoning and talking with mentally ill patients, that only deadly force would stop the deadly force in front of him.  I’m sure his family, and coworkers in the building at the time, are thankful that he did.  Just as the surgeon who removes an appendix, he stopped further damage from happening by focusing damage where damage had to be done.

Do we continue to trust our doctors when the therapy they prescribe risks some adverse effects (damage), when the overall course of treatment is positive in the end, especially when the disease is life threatening?  In the same light, do we trust our doctors, ARNP’s, nurses, EMT’s and other healthcare professionals with a tool that could cause harm, but only in the most dire of situations and only when that harm is necessary to stop the greater harm to innocent people?  I think most Americans do, because most of us believe concealed carry makes us safer.  So why are most doctors not allowed to carry in the hospital where they work?

Hospital administrators are just out of touch with reality when it comes to “gun free zones”.  They are not thinking about who might carry a gun into their hospital, they are afraid of all guns.  So I guess I have to say it: “Guns don’t kill people, people kill people”.

Americans trust their doctors, and I believe Americans trust their doctors with guns.  I have found that my patients do, and they have stood up and said so in public meetings.  I would stand up for my patients as well, even in the face of an armed assailant.  I only hope it doesn’t happen in my hospital because it is a ” gun-free zone”.  As a popular saying around my hospital lately goes, “Hope is not a strategy”.